Most people would agree that Girona is a very beautiful city with a special charm that other provincial capitals in Catalonia are lacking.

And it’s no wonder! This city, steeped in history, enables you to travel back over two thousand years through the medieval quarter, the ʽCallʼ or Jewish Quarter, and the fortified walls.

Apart from its historical sites, there are many other must-see places of interest in Girona that should be included in your visit to the city.

What to see: places of interest in Girona

Of course, the first stop is the banks of the River Onyar.

These houses, painted warm pastel colours, line the river. The best time to see them is in the afternoon when they are flooded with sunlight and they seem to come to life even more. These river façades were created by the joint work of artists, Jaume Faixó and Enric Ansesa, and architects, Josep Fuses and Joan Viader. 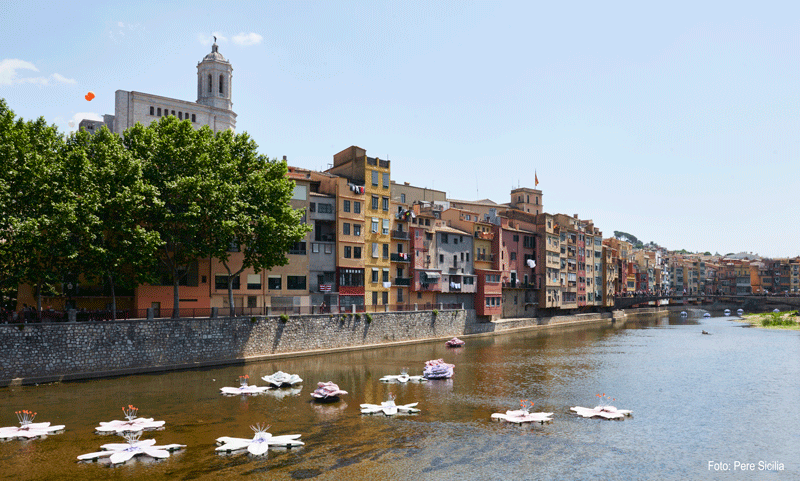 It’s a real pleasure to walk along the streets that line the river leading to the many bridges that offer picturesque views. Worth seeing is the Eiffel bridge, designed by Alexandre Gustave Eiffel, the same architect who designed the Eiffel Tower. The panoramic view of the bridges lends a magic air to the city, where you won’t tire of strolling around and visiting every corner.

There are many places of interest in Girona. But if you wander along these walls, which are a medieval extension of the Roman fortifications, you’ll find lots of lookouts that offer views of the city and its surroundings.

On the City Wall walk you get a panoramic view of the city’s roofs and bell towers in the foreground, while you can pick out the course of the rivers Onyar and Ter in the distance. Forming the backdrop, the mountainous landscape surrounding the city, including peaks such as the Far and Rocacorba.

4.    The Jewish Quarter and Força Vella:

Known as the ʽJuderíaʼ or ʽCallʼ, the Jewish Quarter in Girona is one of the best preserved of its kind, not only in Spain but in the whole of Europe. You’ll be amazed at the maze of steep, narrow streets that lead to the Cathedral. Incidentally, you might like to know that famous films, such as The Perfume, The Soldiers of Salamina, and the 6th season of Game of Thrones were shot in these streets. 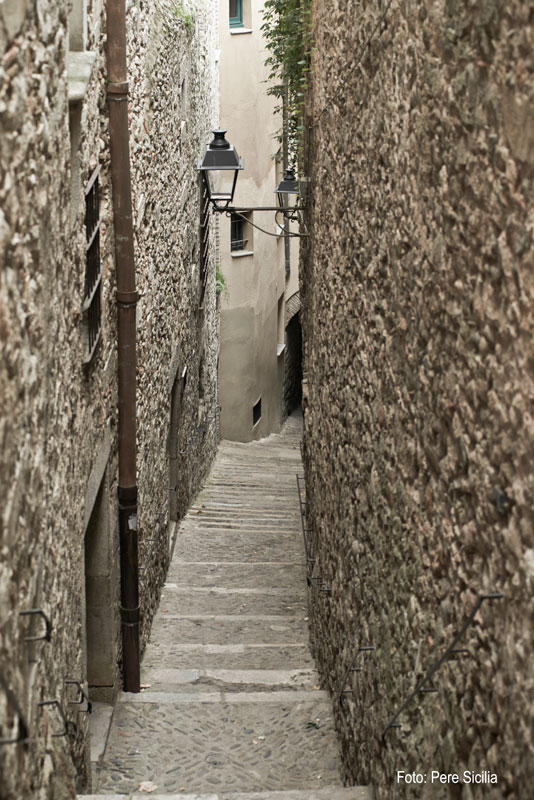 After wandering through the medieval streets, always going up any steps you encounter, you’ll come to the Cathedral of Santa María of Girona, located at the city’s highest point.

It brings together a series of different styles of architecture, ranging from Romanesque (the cloisters and Charlemagne tower) to the baroque façade and steps. Its most singular feature is the large 15th-16th century Gothic nave which, at a width of 23 metres, is the widest of its kind in the world.

From here you can enjoy the best views of the city.

Another very important must-see, converting the Catalan city of Girona into a space for culture, is the City History Museum, located in the heart of the old quarter.

These baths, dating back to the 12th century and inspired by Roman baths, are located next to the Cathedral. Despite its name, this is a Christian Romanesque construction. These baths were built in 1194 and were based on and imitated the design of Arab baths; hence their name.

Continuing through the old quarter, you’ll get to the Plaça dels Jurats. On the other side of the river Galligants is the church of Sant Pere de Galligants, a former Benedictine abbey, home to the Archaeological Museum of Catalonia since 1857. Opposite you can see the 12th century chapel of Sant Nicolau.

This church was Girona’s first cathedral until the 10th century. It is mainly Gothic in style, although it has a Romanesque apse and baroque façade. It has a castle-like appearance and houses some remarkable works of art, such as eight pagan and early Christian sarcophagi (4th century), and the Recumbent Christ (14th century), work of the master sculptor, Aloi de Montbrai.

After strolling through the wonderful Jewish Quarter and Força Vella, you can head for the Rambla de la Llibertat, created in the 13th century to host a market. It’s a long urban space running parallel to the river Onyar, and is home to several cafés and shops tucked under its arcades.

11. Festivals and fairs in Girona:

The most important festivities in Girona are the San Narcis Fair in October, Temps de Flors (Flower Season Show) in May, and Easter festivals in March or April. So if you happen to be in Girona at this time you can see a great variety of exhibitions ranging from trade fairs to several outdoor markets and fairs that fill the city with crafts people, collectors and antiques dealers. In the evening, you can also sample many local dishes, etc. 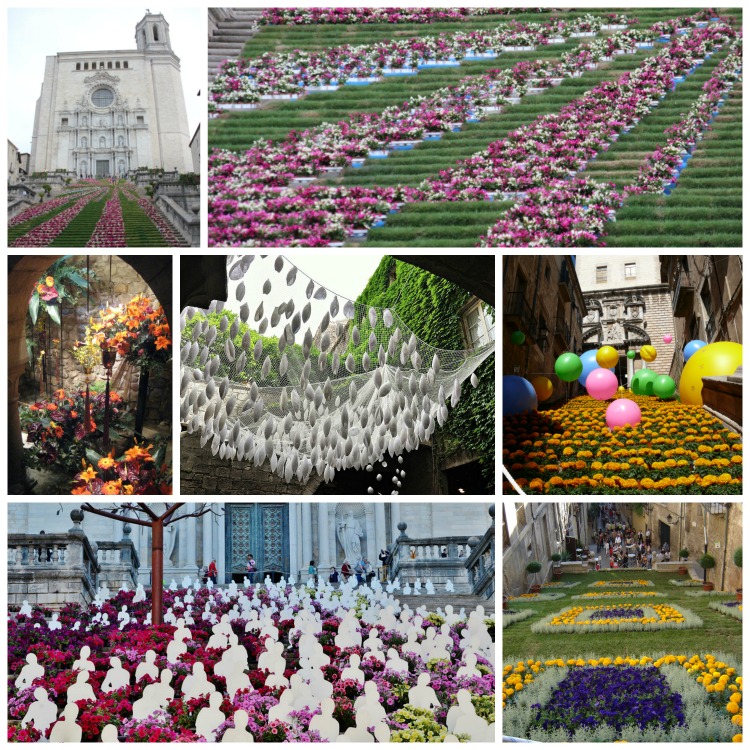 This is the largest green urban space in Catalonia and is demarcated by the Ter, the Onyar and the Güell, three of Girona’s four rivers. La Devesa Gardens is undoubtedly the main lung of Girona and is made up of rows of plane trees (whose leaf is the symbol of the city), forming avenues that provide beautiful walks in this huge 40-hectare garden. It’s a quiet spot where you can walk and enjoy nature in the heart of the city.

In Calle Calderers we can find a statue of a lioness, one of the many stone animals described in the Legends of Girona. It clings to the top of a 12th-century column and looks towards the church of Sant Fèlix.

Placed at a great height, Girona legendry has it that people were forced to stand on tiptoe to reach the lioness, stretching out their arms as far as they could. This gesture ended up becoming a ritual until touching and kissing the lioness’s ass was converted into a kind of symbolic baptism for people entering or leaving Girona. It’s accompanied by the words: “Si a Girona vols tornar, el cul de la lleona has de besar” (If you want to return to Girona, you should kiss the lioness’s ass). 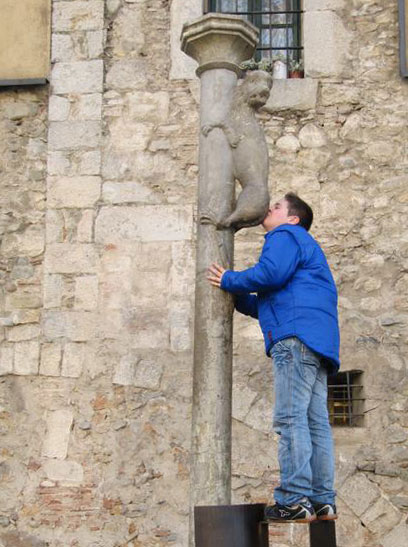 So don’t wait to be told! They even says it brings you luck, like so many other things in this city.